Contents show
1. Autoimmune diseases – what could be the cause?
2. Can mercury be a cause of autoimmune diseases?
3. Possible sources of mercury
4. Mercury-containing amalgam fillings
5. Mercury in fish
6. How does mercury pollution in fish come about?
7. Predatory fish contain a particularly large amount of mercury

Autoimmune diseases – what could be the cause?

In an autoimmune disease, the immune system goes haywire and attacks the body’s own organs or tissues – just as if they were pathogens.

The causes of autoimmune diseases are still relatively unexplained in conventional medicine.

However, scientific studies have already been able to establish a connection between autoimmune diseases and diet and the health of the intestinal flora.

Researchers at the US University of Michigan now wanted to find out to what extent environmental factors – such as B. the mercury load in food – play a role in the development of autoimmune diseases.

Can mercury be a cause of autoimmune diseases?

“In our study, the patient’s personal exposure to mercury was the main risk factor for autoimmune disease.”

Once ingested, mercury accumulates in body tissue and cannot be excreted so easily. In this way, the highly toxic heavy metal can cause significant health problems.

Analysis of data from women aged 16 to 49 found that higher exposure to mercury was associated with higher levels of autoantibodies. Autoantibodies are antibodies that are directed against the body’s own tissue.

The more mercury there was in the body of the study participants, the more likely it was that their immune system would sooner or later attack their own bodies and thus develop an autoimmune disease.

The presence of autoantibodies does not automatically lead to the development of a corresponding disease.

“But we know that the presence of autoantibodies makes the development of an autoimmune disease more likely,” emphasizes Prof. Somers.

An increase in autoantibodies can be observed years before the first symptoms appear.

Two major sources of mercury today continue to be dental amalgam fillings, which are half mercury, and the consumption of seafood and fish.

Even if one decides to remove the mercury-containing dental fillings, this must be carried out very carefully and professionally so that the patient is not even more poisoned with the mercury dust and vapors released when they are drilled out.

Of course, fish also contains valuable nutrients and vital substances. Nevertheless, one should not overdo fish consumption – which applies in particular to women who want to have children, pregnant women, and breastfeeding women, since they are apparently more at risk of autoimmune diseases than other groups of people – according to the scientists around Prof. Somers.

The experts recommend that risk groups should not eat more than 340 grams of fish per week. If fish consumption remained within this range, no health damage from mercury would have to be feared.

How does mercury pollution in fish come about?

It is mainly industrial pollution of the seas which means that numerous types of fish now contain significant amounts of mercury. It is therefore important to distinguish between the individual types and also the origin of the fish because the mercury load varies greatly depending on the type of fish.

Researchers at the Woods Hole Oceanographic Institution in Massachusetts/USA determined that the mercury content of the oceans has tripled in the past 150 years. It is estimated that there is a total of up to 80,000 tons of mercury in the world’s oceans. The North Atlantic is particularly hard hit.

It is largely unclear how these changes will affect marine life. According to the researchers, it is possible that fish and seafood now absorb three times more mercury than 150 years ago. “But it could also be more,” they warn.

Herbivorous fish ingest mercury through their food. If they are eaten by larger predatory fish, the mercury enters their bodies.

The more other fish a predatory fish eats and the older it is, the more mercury is stored in its organs and fatty tissue.

The consumption of predatory fish such as tuna, eel, shark, swordfish, and monkfish is therefore not recommended – especially for pregnant and breastfeeding women.

Aside from the personal risk of autoimmune disease, mercury can cause serious developmental disorders in the unborn child and infant. 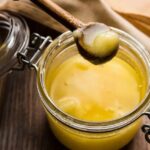