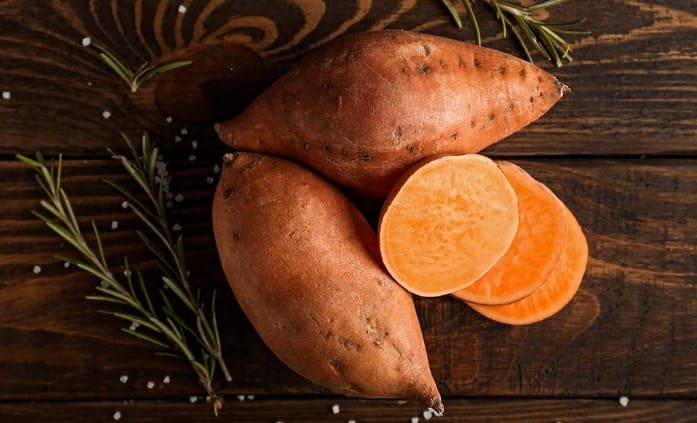 The sweet potato comes from South America and loves tropical climates. In the meantime, however, it can also be grown in Germany or Switzerland. The sweet potato is considered one of the healthiest and most nutritious vegetables. It is chock-full of valuable nutrients and vital substances and, if consumed regularly, has correspondingly positive effects on health. Sweet potatoes taste exceptionally good and can be prepared in countless ways – whether raw or boiled, whether grilled or as chips, whether quick or complex, whether house style or exotic. Anything is possible with sweet potatoes.

Sweet potatoes are not potatoes

This means that it contains twice as much glucose as fructose so sweet potato can also be tolerated to a certain extent by many fructose-intolerant people.

This is how the sweet potato came to Europe

The sweet potato once traveled from South America to Europe in the luggage of the Genoese seafarer Cristoforo Colombo, better known to us as Christopher Columbus. In Spain and Portugal, the pink tuber thrived and was soon chosen to be the food of the poor.

Apparently, as a result, people observed how fiery and passionate the members of the lower class now became. Because in no time the sweet potato had the reputation of an aphrodisiac and potency-enhancing miracle tuber and was immediately eaten by the rich.

Then the English pricked up their ears and also began to eat sweet potatoes. However, they had to import the tuber because it was too cold for the plant in England.

The growing areas of sweet potatoes

Today, the sweet potato is in third place in the cultivation hit list of all root and tuber vegetables worldwide – just behind the two front runners, potato and cassava. Over 120 million tons of yams are harvested around the world each year, with 100 million tons bearing the brunt in China, where most of the yams are used as animal feed. Sweet potatoes that are offered for sale in Germany mostly come from Israel or South America.

However, some sweet potato varieties can also be grown in this country, so that there will probably be more and more domestic sweet potatoes in the next few years.

How to store sweet potatoes

In extreme cases, the sweet potato can grow up to 30 cm long and weigh several kilograms. In contrast to our usual potato, the sweet potato does not store so well. In the refrigerator, it should be stored in the not-so-cold areas. If you have a cool pantry, you can keep the sweet potatoes there for a few days.

You can eat the leaves of the sweet potato

You can just about eat the tubers of our potatoes. The rest of the plant is known to be poisonous. The leaves of the sweet potato, on the other hand, are used as food in the tropical homelands of the batata and processed into spinach-like dishes.

The sweet potato can be eaten raw

Is there hydrocyanic acid in sweet potatoes?

Cassava, lemon seeds, lima beans (there are also low-cyanide varieties), and bitter almonds, all of which taste distinctly bitter, contain alarming amounts of cyanide. However, sweet potatoes contain little, if any, hydrocyanic acid (Heiss, 2004, Food technology: Biotechnological, chemical, mechanical, and thermal processes in food processing). Yes, they apparently contain so little that no information on the specific hydrocyanic acid content can be found in the literature.

In addition, the human organism can break down certain amounts of hydrocyanic acid (20 to 30 mg per day), which means that it has a detoxification mechanism for hydrocyanic acid – for the simple reason that it is hydrocyanic acid or its precursor compound (so-called cyanogenic glucosides). contained in many of our daily foods, e.g. B. in peas, in grain, in beans, in linseed, in cherry juice, even in beer, yes basically in almost all plant foods.

In the case of hydrocyanic acid, it’s all about the dose. However, this cannot take on any alarming proportions through the “normal” consumption of today’s sweet potatoes.

In addition, the hydrocyanic acid – if present – would be removed during the cooking process (duration as with potatoes). It vaporizes at 26 degrees.

Oxalic acid is another substance in sweet potatoes that some people worry about. You will u. accused of impeding the absorption of some minerals such as iron and of promoting kidney stones (so-called calcium oxalate stones).

Food containing oxalic acid is often discouraged, although this is now considered outdated. Because almost all plant-based foods – especially vegetables and herbs – contain oxalic acid. And since a plant-based diet has been proven to protect against diseases, oxalic acid cannot be as problematic as is repeatedly claimed.

In any case, sweet potatoes contain less oxalic acid than carrots, almonds, tofu, or cocoa – namely around 240 mg per 100 g. Spinach, on the other hand, contains over 900 mg, and rhubarb around 800 mg.

The shell is edible

As a nightshade plant, if stored incorrectly (if you store it in the light instead of in the dark), the conventional potato tends to form a toxic substance called solanine in the skin. The shell usually turns green. Potato sprouts also contain solanine. Therefore, neither the sprouts nor the skin of potatoes is eaten.

What is Caiapo and what does this substance do?

Caiapo was discovered as follows: In a region in Japan (Kagawa), a particularly large number of sweet potatoes are eaten. There, the sweet potato is also eaten raw. At the same time, the local population seemed unaware of diseases such as anemia, hypertension, and diabetes.

This fact aroused the curiosity of some researchers, including the scientist from the CNR ( Consiglio Nazionale Delle Ricerche, National Research Council of Italy) in Padua. In cooperation with the University of Vienna, they discovered the reason for the beneficial effects of the sweet potato. They identified the substance Caiapo. It is mainly contained in the skin of the batata.

Experiments with Caiapo then showed that people suffering from type 2 diabetes mellitus experienced a reduction in their fasting blood sugar levels. In addition, the cholesterol levels dropped and the blood improved. Overall, all of this led to a significant improvement in the general state of health of the volunteer study participants. The results of the study were published in Diabetes Care, the official journal of the American Diabetes Association.

Do sweet potatoes fit into a low-carb diet?

The sweet potato provides 24 g of usable carbohydrates per 100 g. It is therefore certainly not an optimal low-carb vegetable. (By the way, the “normal” potato only provides about 15 g of carbohydrates.)

The sweet potato is alkaline

Like all vegetables, sweet potato is one of the alkaline foods.

Sweet potatoes are unusually rich in antioxidants. They have a preventive effect on the body against inflammation and thus also against problems that can be attributed to inflammation, such as e.g. B. asthma, arthritis, gout, and many other conditions.

Sweet potatoes are an excellent source of healthy carbohydrates, especially for people who have problems with blood sugar levels. This juicy root vegetable can help regulate blood sugar levels and thus prevent the development of insulin resistance (pre-diabetes).

Sweet potatoes are particularly high in fiber when eaten with the skin on. Sweet potatoes not only relieve constipation and promote healthy digestion but also prevent colon cancer.

The vitamins and secondary plant substances in the sweet potato also strengthen the immune system.

Sweet potatoes are helpful in preventing heart disease. Because they are high in potassium, sweet potatoes may help prevent heart attacks or strokes from occurring. Potassium also ensures a healthy regulation of the body’s electrolyte and fluid balance. In this way, blood pressure is stabilized and heart functions are strengthened.

Sweet potatoes can also be helpful when suffering from stress (e.g. burnout). In stressful times, a particularly large number of vital substances are needed and consumed. from which sweet potatoes can be delivered.

Sweet potatoes are the most nutritious vegetable according to CSPI

The Center for Science in the Public Interest CSPI named the sweet potato the most nutrient-dense vegetable of all. The sweet potato received 184 points in the CSPI evaluation for its balanced wealth of nutrients and vital substances. The sweet potato thus leads the CSPI list of the healthiest vegetables by a clear margin. The second healthiest vegetable (potato) received only 83 points. The CSPI is an American independent non-profit organization that tries to improve public health with information about nutrition.

Grow the sweet potato yourself

There are now varieties of sweet potatoes that can also be grown in Central Europe. The increasingly mild weather in our region also ensures that exotic plants feel more and more comfortable. The sweet potato seedlings are planted after the ice saints, as the plant would die off in the event of frost. A loose and humus-rich soil is important, basically the same soil in which potatoes thrive.

The sweet potato is not susceptible to diseases or pests and is therefore an interesting plant for self-sufficient and hobby gardeners. Only mice nibble on the tubers when they track them down.

Waterlogging must be avoided, but also dryness. Sweet potatoes can be harvested from October. You should be careful not to injure the tubers, otherwise, they will start to rot very quickly in these places and can no longer be stored.

The preparation of the sweet potatoes

Sweet potato can be prepared in many different ways and is suitable as the basis for an infinite number of different dishes. For example, you can enjoy sweet potatoes cut into pieces as delicious, juicy raw finger food or finely grated as a salad (similar to carrot salad).

The sweet potato can also be used for all “normal” potato recipes. So you can cook the sweet potato (with the skin), you can bake it, gratinate it, fry it, roast it or puree it.

In Ayurvedic and Indian cuisine, the sweet potato is also often used as a dessert. 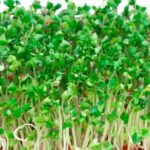 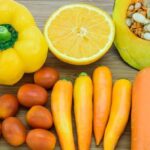