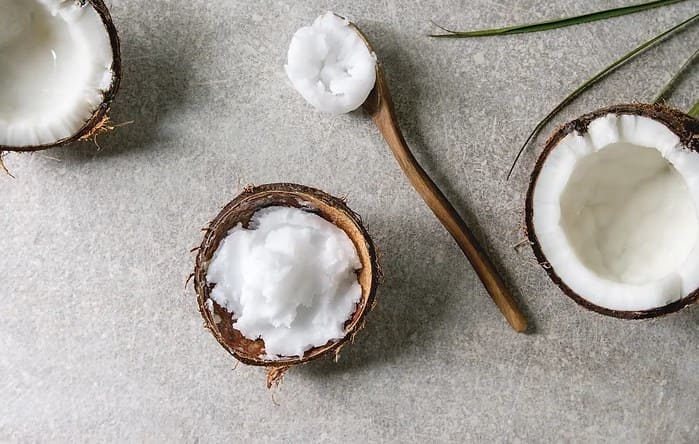 The way from white pulp to copra

The coconut palm bears fruit all year round, so ripe or unripe coconuts can be harvested at any time. The coconut offers very different products, such as coconut water, the sweet, almost clear liquid of the young, i.e. green and unripe, harvested coconut. Coconut water can serve as a drinking water substitute.

The cavity of the coconut is lined with a white, aromatic pulp. As the coconut matures, this layer becomes thicker and the flesh drier. When dried it is called copra.

The fresh flesh of the coconut contains up to 50% water. Drying before further processing reduces the water content to around 5%. The fat content of copra is between 60% and 70%.

However, it is noticeable that in the trade the term “coconut fat” is often used for the inexpensive, heavily processed, i.e. refined, hardened, and quite tasteless baking and frying fats. They are often offered in plate form (plate grease) or in block form and have a very long shelf life.

Coconut oil, on the other hand, is often used to describe high-quality coconut oils of extra virgin quality. They are usually bottled in jars, unrefined, and have an aromatic coconut flavor.

But there are also differences in the area of ​​coconut oils. Here, too, there are higher and lower qualities, so the above (rather arbitrary) definition does not always apply. Because coconut oil can be made from coconut meat that has been stored for a long time at high temperatures and bleached. However, it can also be pressed from fresh coconut meat at low temperatures and sold unbleached. This high-quality coconut oil is not pure white but can be cream-colored or marbled.

An organic seal also indicates very good quality for coconut fats and coconut oils, which starts with cultivation. In addition to the benefits for the environment, organic farming also has positive aspects for the farmers in coconut-growing countries. In conventional coconut plantations, artificial fertilizers are used to accelerate the growth of the coconut palms, while organic farmers rely on coconut fibers rich in potassium and natural fertilizers.

Organic coconuts are not produced in monocultures but grow in mixed cultures with pineapples or bananas. If the products made from organic coconuts are also offered from fair trade, this protects the social situation of organic farmers and guarantees them social working conditions and a higher price when purchasing their coconuts.

Fairtrade can support projects in the cultivation countries, which among other things also improve the soil quality. High soil quality, in turn, is one of the most important foundations of life, since healthy food can only thrive on healthy soil.

In organic farming, there are not only guidelines for cultivation, but also for processing. For example, no solvents may be used in the production of organic coconut fats and organic coconut oils, hardening is prohibited and deodorization (to remove the aromas) may only be carried out using steam.

Of course, coconut fat is not only sold pure, but also processed in numerous products of the food industry, especially in the area of confectionery, baked goods, confectionery, but also in spreads and of course in the cosmetics industry.

Coconut fat and coconut oil, are the ideal fats for frying and baking

Coconut fat is considered the ideal fat for roasting, baking, and frying, i.e. for high heating. But it can also be used as a spread, either on its own or mixed with other ingredients, such as fried onions or a little salt.

Coconut fat for your health

There are now numerous studies on the health effects of coconut oil and coconut fat. For example, it is known that coconut fat, despite its saturated fatty acids, does not have a negative effect on cardiovascular health. Responsible for this rather neutral effect could be the high content of medium-chain fatty acids in coconut fat, which is around 45%.

The medium-chain fatty acids in particular ensure that coconut oil is very easy to digest and can therefore also be used for digestive problems or enzyme deficiencies.

Coconut flour is an alternative for people with intolerances

In addition to the well-known coconut milk and coconut fat, coconut flour is another interesting coconut product. It is the ground press cake, i.e. the ground residue from coconut oil production. Coconut flour is gluten-free, has an aromatic coconut flavor, and is a very good source of fiber (38 g per 100 g) because it contains three times as much fiber as conventional whole wheat flour.

Especially people who suffer from grain intolerance, gastrointestinal diseases, or celiac disease can reach for coconut flour and mix it with other flour to make fine baked goods and desserts. Coconut flour can also be used to thicken sauces. 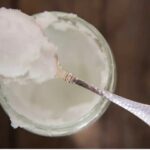 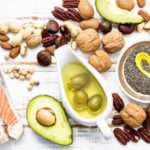