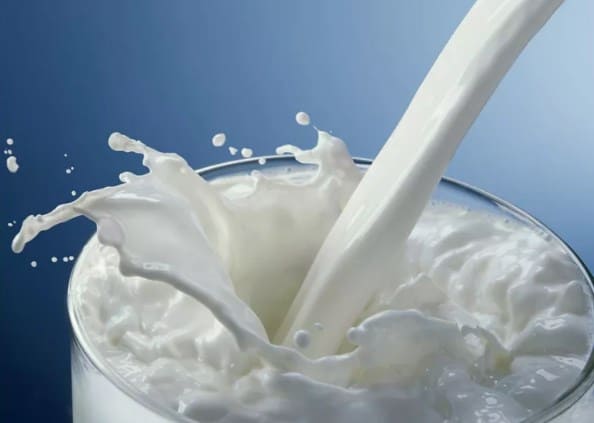 Milk has been a controversial food for years. However, many people still believe that milk is healthy. In the meantime, the scientific evidence for the harmfulness of cow’s milk is increasing – at least if it is consumed in the currently available quality and the amount recommended today.

Milk is high in calcium, and calcium is good for bones. That doesn’t mean milk is good for the bones or otherwise healthy – which half the world seems to think, but that’s a real fallacy.

A very recent study from October 2014 is of the same opinion. In it, the Swedish researchers around Prof. Karl Michaëlsson wrote that milk is most likely completely useless for the bones so consuming milk cannot prevent osteoporosis or broken bones.

Yes, milk should be consumed sparingly (if at all), as it can actually increase the risk of fractures.

Around 17,000 women and 5,000 men suffered fractures over the course of the study. Now, one might think that fractures tended to be experienced by those people who consumed very little milk. But that was not the case.

However, Prof. Michaëlsson and his team from the Karolinska Institutet in Stockholm/Sweden were by no means able to establish that an increased intake of milk reduced the risk of bone fractures. On the contrary, milk consumption increased the risk of osteoporotic fractures in this study.

Milk increases the risk of death

During the study period, 15,000 women and 10,000 men died. The researchers determined that apparently, those people who particularly liked to drink milk died prematurely. The risk of death increases with increasing milk consumption.

This effect was more pronounced in women than in men, showing how thoughtless it can be to advise menopausal women to consume a lot of milk to protect themselves from osteoporosis. The osteoporosis protection does not kick in and life ends earlier!

However, these findings are not entirely new. It has been known since at least 1997 from the Nurses’ Health Study (a study with nurses) that the consumption of milk has no positive effect on bone density or stability and can even increase the risk of bone fractures.

In Prof. Michaëlsson’s study, the blood analyzes of the milk drinkers revealed increased levels of inflammation and an increased level of oxidative stress. However, inflammatory processes in combination with oxidative stress are the beginning of almost every disease – regardless of whether it is high blood pressure, arteriosclerosis, diabetes, arthritis, osteoporosis, neurodermatitis, irritable bowel syndrome, allergies, chronic sinusitis, Parkinson’s, inflammatory bowel diseases, Alzheimer’s, cancer or whatever acts.

In other studies, consumption of dairy products did not show any pro-inflammatory effects unless there is an intolerance or allergy.

According to supposed “experts”, children and young people should consume a lot of milk so that a stable skeleton can form.

dr However, Diane Feskanich and her team from Harvard University in Boston, USA, discovered in 2013: Increased milk intake in teenagers cannot have a positive effect on the risk of hip fractures later in life.

On the contrary: the observations of almost 100,000 participants showed that high milk consumption in male adolescents could even increase the risk of later bone fractures.

But that’s not the only disadvantage of milk that children have to reckon with. Consumption of milk presumably increases the risk of developing type 1 diabetes as a child.

As an autoimmune disease, type 1 diabetes develops when the immune system suddenly believes that the insulin-producing cells in the pancreas are dangerous enemies that must be destroyed immediately.

Since the head office of the immune system is located in the gut, so to speak, gut health plays an important role in the development of autoimmune diseases.

The proteins in milk – especially the so-called A1 beta-casein – seem to have a negative effect on the intestinal environment and thus promote irritation of the immune system – just like type 1 diabetes.

In line with this, another study showed that breastfeeding with human milk can protect children from the onset of type 1 diabetes. It is therefore highly recommended NOT to feed infants cow’s milk products or formula based on cow’s milk, but to simply breastfeed them.

In another study, it was discussed that it is very likely that children or infants will have very different reactions to milk than adults. In children, cow’s milk could reprogram the release of endogenous hormones in such a way that this can lead to cancer or heart disease in adulthood.

But that’s not all. Milk affects the health of children in a completely different way…

Milk is one of the main reasons why many children constantly suffer from respiratory infections (coughs, runny noses), feverish colds, and middle ear infections. The frequent occurrence of asthma in some children can also be traced back to copious milk consumption.

The risk of these symptoms increases with the degree of processing of the milk! The more natural and original the quality of the milk consumed, the healthier its consumers are. Nevertheless, raw milk is always discouraged.

Completely untreated raw milk, which is bottled directly after milking, so to speak, can actually be naturally contaminated with bacteria. On the one hand, however, it is only the natural bacteria in cow’s breast milk that do not cause any problems.

Since very few people have access to milk of this quality, people today fear the same milk-related diseases as they did in the Middle Ages, despite high-tech barns and immaculate milking systems: listeriosis, tuberculosis, and EHEC.

It’s all in the milk: fever, colds, middle ear infections, and asthma

It has long been known from studies that children who live in rural areas and primarily drink raw milk have a risk of contracting respiratory infections that is up to 30 percent lower than children who are given treated milk.

If the raw milk is heated before consumption, the risk of illness in children increases noticeably. If the milk is “only” pasteurized, the children are already more susceptible to illness than the raw milk children. But they are not quite as sickly as the UHT milk children.

However, if children drink UHT milk, they often suffer from the entire range of children’s problems that are common today, namely feverish infections as well as middle ear infections, and respiratory tract infections such as colds and coughs. Other marginal factors, such as the children’s diet, could apparently be ruled out as influencing parameters in the corresponding studies.

One of these studies is the very recent “Pasture” long-term study that was published in October 2014 in the Journal of Allergy and Clinical Immunology. Around 8,000 children from Austria, Finland, France, Germany, and Switzerland took part in the Pasture study. About half lived on farms.

After the first year of life, the children’s blood was examined immunologically. A uniform picture emerged: Just as we have already seen in the studies presented above, milk also increases the inflammatory markers (CRP value) in the blood of children:

If you now consider the close connection between high levels of inflammation and the development of chronic diseases such as asthma, then you can only be surprised if children with asthma are consistently served their daily glass of milk – followed by milk slices, yogurt, and many more other dairy products.

They would benefit considerably from a dairy-free diet or should at least receive high-quality, natural raw milk.

However, as soon as the newcomers to the world have finally survived their childhood, including umpteen colds and middle ear infections, the next evil of milk is already waiting in puberty.

Milk has been linked to the development of acne in several studies(3)(4)(5). The research shows that milk drinkers have a much higher chance of developing acne than teens who don’t like milk.

Milk causes insulin levels to rise significantly. This influence, in turn, affects other mechanisms that can ultimately lead to acne.

But don’t worry, important researchers are already solving the problem:

“The elimination of the insulinotropic response elicited by the whey protein in milk will be the most important task of future nutritional research.”

Unfortunately, milk does not only have a negative effect on the skin through the rising insulin level but also through other factors – as we explain under “Milk increases the risk of cancer”, so the safest course of action for acne is to avoid milk altogether.

In the case of chronic diarrhea without an identifiable cause, this is also the best first-aid measure – at least until a possible lactose intolerance can be ruled out.

Chronic diarrhea? The milk could be the reason

The aspects listed already show that milk has proven to be intolerable for humans through a wide range of symptoms and mechanisms of action.

Interestingly, however, only lactose intolerance is recognized as milk intolerance.

Although this affects almost 75% of the world’s population, the proportion of lactose-intolerant people in Europe is much lower (10%) and therefore not quite as common as in Africa or Asia, for example.

This leads to unpleasant symptoms such as flatulence, abdominal cramps, diarrhea, or headaches.

At the beginning of our article, we already mentioned that milk can shorten our lifespan because it promotes chronic inflammatory processes and thus paves the way for many diseases.

It has also been proven that some types of cancer can be traced back to chronic inflammatory processes and therefore grow faster if milk is often on the menu.

But milk has other properties in store, all of which can accelerate cancer growth or increase the risk of cancer.

Milk increases the risk of cancer

As is well known, the task of milk is as follows: An infant – who is not yet able to eat solid food – should be provided with everything it needs to grow as quickly as possible.

Milk, therefore, contains various so-called growth factors. Cow’s milk contains a lot more of it than, for example, human breast milk. After all, the calf is said to grow much faster and become much heavier than a human infant tends to do.

But it is precisely these growth factors that have an unwanted effect on the cell growth of cancer cells. They can actually fuel cancer growth.

It is associated in particular with the following types of cancer: breast cancer, prostate cancer, ovarian cancer, but also with the acne already mentioned.

In addition, the milk produced today in factory farming is particularly heavily contaminated with hormones. For example, milk from industrial agriculture contains far too much estrone sulfate. This is an estrogen compound suspected of causing testicular, prostate, and breast cancer.

Milk from traditional production has significantly lower hormone levels. The reason lies hidden in the much shorter milking period here.

Therefore, if you are afflicted with a chronic illness, eliminate milk and dairy products from your diet (at least as a test) and see how you are doing for a few weeks! 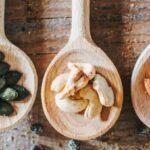 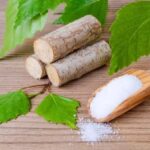