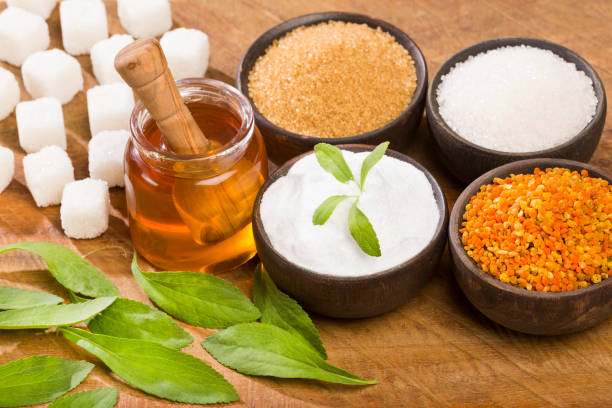 Sugar-sweet and healthy at the same time? – that sounds unrealistic, but it is very simple. Vegetable products are just as suitable for baking and cooking as table sugar. In addition to fewer calories, they have many other health benefits. PraxisVITA introduces you to healthy sugar alternatives from agave syrup to xylitol.

Excessive sugar consumption has many health disadvantages: caries, diabetes, obesity, and faster skin aging are just a few of them. The WHO recommends a maximum of 25 grams of sugar per day for adults. The reality is different: on average, an adult eats about four times as much per day. It is not difficult to reduce the consumption of industrial sugar (household sugar) if you know the right substitute products.

Healthy sugar substitute – which products are there?

Agave syrup, stevia, coconut blossom honey – with all sugar substitutes, it is important to use them in moderation. We will explain to you the advantages of sugar substitutes compared to industrial sugar and in what ratio you can replace them.

The sweet syrup consists of the boiled juice of the Mexican agave plant and has a caramel-like aroma. It’s slightly sweeter than honey and has a lower glycemic index than table sugar – a plus for agave syrup. High-glycemic foods cause blood sugar levels to spike and stimulate insulin release. The result is low blood sugar and cravings.

Since agave syrup consists almost entirely of fructose, you should not consume too much of it – because too much can have a laxative effect. This sweetener is not low in calories: 100 grams of agave syrup have 310 calories. For comparison: household sugar has 387 calories for the same amount. Unlike other natural sweeteners, agave syrup is as low in vitamins and nutrients as table sugar.

Dates as a natural sugar substitute

The dried fruits of the date palm have significantly fewer calories than industrial sugar: 282 per 100 grams. And that’s not the only advantage: the sweet fruits contain important minerals such as iron, magnesium, and calcium as well as B and C vitamins. In addition, they quickly provide energy and are also suitable for diabetics (maximum three dates per day).

In pureed form, dates are an ideal sugar substitute for sweetening pastries and smoothies. To make syrup, soak the dates in water and then puree the fruit. Those who cannot tolerate too much fructose should dose dates carefully and test how many fruits the body can absorb well.

Dosage – replace sugar with date syrup: Dates have a high sweetening power. Therefore, use only half as much syrup as sugar and sweeten it if necessary.

Honey has a similar calorie content as sugar and also consists of 70 percent fructose and glucose. Nevertheless, honey has advantages over table sugar: it has a stronger sweetening power, which is why you need to use less of it. Another good property of honey is: It causes the blood sugar level to rise more slowly than industrial sugar – this prevents cravings.

Honey also contains more nutrients than sugar. These include sodium, magnesium, iron, and calcium. However, you should not use too much honey as it has a lot of calories and promotes tooth decay. Nevertheless, the number of calories is somewhat lower than that of household sugar: 100 grams have 304 calories.

Dosage – honey instead of sugar: You can replace sugar 1:1 with honey. If you don’t like it too sweet, use about 20 percent less honey than sugar. In addition to the strong sweetening power, also note the inherent taste that some varieties have.

This natural sugar substitute consists of the nectar of the coconut palm blossom. The sweetener has a low glycemic index. Coconut blossom sugar (available in drugstores) is therefore also suitable for diabetics. Another plus point: it contains potassium, iron, magnesium, and zinc, among other things.

Although the name suggests it, coconut blossom sugar hardly tastes like coconut, so it doesn’t change the taste of the pastry. A small disadvantage: This sugar substitute has almost as many calories as industrial sugar: 384 calories per 100 grams.

Rice syrup – the oldest sweetener in the world

Rice syrup is also called rice honey and is one of the oldest sweeteners in the world. The Japanese sugar substitute is made from ground whole grain rice. Rice syrup contains many polysaccharides (oligosaccharides). This delays the absorption of sugar into the blood, which in turn curbs the craving for sweets. Rice syrup is also suitable for people with fructose intolerance because it contains no fructose. Nutrients such as potassium, iron, calcium, magnesium, and phosphorus make the nutty-tasting syrup a healthy alternative to sugar. 100 grams of rice syrup has 315 calories. You can get the sweetener in drugstores.

Dosage – rice syrup instead of sugar: You can also bake with rice syrup – simply use 10 percent less liquid than specified in the recipe. Use the same amount of natural sweetener as table sugar.

The sweetener comes from the South American stevia plant and has been approved in Germany since 2011. Stevia glycosides are up to 300 times sweeter than table sugar. Stevia has no calories, does not raise blood sugar levels, and is considered to prevent tooth decay. This natural sugar substitute is also suitable for diabetics. Four milligrams per pound of body weight is the Food Safety Authority’s recommended daily allowance for adults.

Dosage – how much stevia to use instead of sugar?: For baking, stevia is best in powder form. A level teaspoon of the powdered stevioside extract corresponds to a sweetening power of around 200 grams of sugar.

Xylitol is not an exogenous substance but is also produced in the human body in the course of energy metabolism. Xylitol is industrially produced from corn or birch and is therefore also known as birch sugar. The sugar substitute is found in chewing gum because it has a tooth-care effect. Xylitol also scores points in terms of energy density with 240 calories per 100 grams.

About 0.5 grams per pound of body weight is well tolerated by most people. Should digestive problems occur: You can gradually get your body used to the sweetener by only using small amounts at the beginning. You can buy birch sugar online and in some drugstores.

Dosage – Xylitol for baking: Xylitol has a sweetening power similar to that of sugar and is therefore used or substituted in the same amount.

Salt is a flavor enhancer: sprinkling a little salt over fruit enhances the sweet taste. A pinch of salt in the cake batter has the same effect: the pastry tastes sweeter and you can use a little less sugar in the first place. 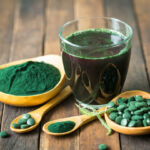 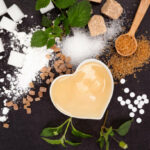