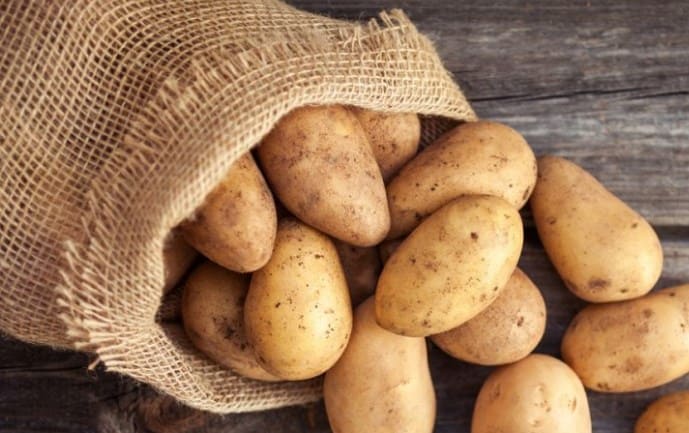 Buying really good potatoes is not that easy. Because all sorts of chemicals are used with potatoes, including those that are only sprayed on after the harvest so that the tubers have a longer shelf life. We explain what you should pay attention to when buying potatoes.

Since potatoes can be treated with chemicals to inhibit sprouting, it is advisable to look out for untreated goods when buying potatoes.

If stored properly, potatoes can be kept for months without being treated. However, in April or May at the latest, the tubers begin to sprout – according to their natural cycle and depending on the variety. After all, each potato wants to grow into a new plant and form many new tubers over the course of the summer.

But that is exactly what is not desired in the food trade. In any case, potatoes should be able to be stored until the next harvest in autumn without shoots or other changes appearing on the potato. In the meantime, this works quite well, because when was the last time you discovered a sprouting potato in your pantry? Not in a long time? That would be no wonder.

Because the sprouting has long since been expelled from the potato – with germ-inhibiting chemicals. These so-called growth regulators are either sprayed onto the leaves during growth or the potatoes are gassed several times after harvest.

A wide variety of germ inhibitors are used, such as maleic acid hydrazide, which is sold under various brand names such as Itcan. This not only treats potatoes but also onions, garlic, and shallots. The popularity of the method is shown by the fact that two other maleic hydrazide products were launched in 2012 (Fazor) and 2017 (CROWN). Other substances that are used for the purpose of germ inhibition are already known from the area of ​​treated citrus fruits: imazalil and thiabendazole.

Maleic acid hydrazide is now a pesticide and is considered a neurotoxin, but is described as not mutagenic in the amounts that can be detected in food (in other sources it is very likely mutagenic) and also as not carcinogenic. The acute toxicity is low.

On some insects, such as B. the lacewing, which is considered an important benefit, maleic acid hydrazide has a toxic effect on fish and aquatic life as well, with birds it is not yet known, and with earthworms, it is said that “unacceptable effects” are not expected. However, the respective farmer is recommended to apply the agent only with a protective suit and rubber boots.

Neither washing nor peeling helps

Maleic hydrazide is only sprayed onto the plant three to four weeks before harvest. It gets into the tubers via the leaves and roots and is stored there, which means that it cannot be removed by washing or peeling.

It is interesting that the maximum residue value of maleic hydrazide in potatoes may be 50 mg/kg, but only 15 mg/kg in onions and shallots – and that, when you eat a lot more potatoes than onions and potatoes sometimes, too eat the peel, but not so much with onions.

The germ inhibitor chlorpropham is a prime example of how long the ban on pesticides can last, even though the dangers they pose to people, animals, and the environment are well known. Between 1996 and 2020, chlorpropham, classified as harmful and possibly carcinogenic, was the most commonly used germ inhibitor in Germany. The University of Kiel explained back in 2013 to K-Tipp, the Swiss consumer magazine, that chlorpropham can damage the nervous system, liver, and kidneys, which is why it should be avoided.

The substance largely remains on the skin but has also been found in tests – according to the Austrian environmental organization Global 2000 – in cooking water, boiled potatoes, and processed products such as crisps and French fries, which a study from 2001 had already confirmed. Chlorpropham is also harmful to the environment, particularly to aquatic organisms and birds.

In July 2019, the approval for chlorpropham in the EU finally expired. As a result, the European Commission finally decided that the germ inhibitor may no longer be used from October 2020 due to the dangers it poses. In Switzerland, its use was banned in September 2020. More than 20 pesticides and germ inhibitors with chlorpropham had to be taken off the market.

However, potatoes previously treated with chlorpropham can still be sold. This means that throughout 2021 there will still be potatoes in circulation that have been treated with it. In addition, chlorpropham is still used in other countries, such as the USA. As a result, it is still possible to catch potatoes that contain the toxin.

When chlorpropham was still legal in the EU and Switzerland, maximum residue levels of 10 mg per kg of potatoes were prescribed. At the same time, consumers were advised not to consume more than 0.2 mg per kg of body weight.

For example, if a 6-year-old child weighs 20 kg, it would already reach the maximum value with 400 g of potatoes (if these are contaminated with 10 mg chlorpropham per kg). And if the child only ate half the potatoes (which would be the equivalent of a large portion of fries), then it would still reach the limit that was in place until 2006.

Since the setting of limit values ​​is based more on the current level of pollution and less on human health, the value had to be increased at the time because the quantities of chlorpropham used in potatoes were so high that the lower value was possibly exceeded too often. With the new value, on the other hand, there was a lot of room and chlorpropham could be used very relaxed.

In the EU, chlorpropham was THE active ingredient of choice for sprouting in potatoes until October 2020. Since it was announced that the approval would not be renewed, countless conventional farmers have been desperately looking for an equally effective replacement. Until recently there was only maleic hydrazide. But then the sprout inhibitor 1,4 Sight with the active ingredient 1,4 dimethyl naphthalene was approved.

Shortly after approval, two potato warehouses in Germany erupted in flames after the chemical was sprayed with a hot fogger powered by an internal combustion engine.  As a result, the approval was declared dormant, but this was quickly revised. As a result, the application regulations were simply changed, which state that the suitability of the hot fogging devices used must be observed.

How safe are new germ inhibitors?

So far, it is known that 1,4-dimethyl naphthalene, when released into the environment, has an extremely toxic effect on aquatic organisms – in the long term. But that doesn’t really seem to matter. And what about consumer protection?

In addition, there is already feverish research into new germ inhibitors. In the Netherlands alone, around 20 growth regulators are being experimented with, which are said to be just as effective as chlorpropham. It is to be hoped that the possible negative impacts on health and the environment will be taken into account.

No labeling requirement for germ inhibitors!

If chlorpropham was used, in Germany the note “Treated after the harvest” had to be attached either to the packaging or to the price tag in the case of loose goods. In Austria and other countries, however, this addition was not mandatory, although environmental experts had been calling for it for many years.

Other germ inhibitors do not have to be labeled when they are sold. As a consumer, you cannot tell whether the potato has been treated with maleic acid hydrazide or another germ inhibitor or not – unless you choose organic potatoes right from the start. Because in organic farming, the use of growth regulators is prohibited without exception.

Organic potatoes are not treated with the chemicals mentioned before or after harvesting. In organic farming, on the other hand, agents containing caraway oil and peppermint oil are used.

Ethylene is also approved as a biological germ inhibitor – the so-called ripening gas that is also emitted by apples and many other types of fruit. While it wilts lettuce, it prevents potatoes from sprouting, which is why, despite online information to the contrary, apples can very well be stored next to potatoes, at least if you want to prevent them from sprouting.

Another method to prevent germination is optimal storage in the dark and at temperatures between 4 and 8 degrees, which, however, must not fluctuate. In a February 2016 report, a Bavarian company showed that this chemical-free approach works very well.

The chemical and veterinary investigation office in Stuttgart also recommends buying organic potatoes. Because analyzes between 2016 and 2020 have shown that in 98 percent of organically grown potatoes no or only traces of pesticide residues are detectable. Multiple residues could not be detected in any of the potato samples examined. The lab technicians stated that potatoes usually contain organic where it says organic.

Buy organic potatoes in season, eat something else out of season

Conclusion: We recommend buying only organic potatoes. Here it is possible that the potatoes cannot be kept for as long from spring onwards and will sprout more quickly.

If you have sprouted potatoes at home, you don’t have to throw them away. The shoots should only be removed and cut out generously, as solanine forms in them, the toxin that can also be found in the green parts of the potato. Solanine – if consumed in relevant amounts – could lead to nausea and a burning and scratchy throat.

So that the potatoes do not sprout so quickly at home, store them in a cool (but not too cold, i.e. at approx. 4 to 8 degrees) and dark. If stored below 4 degrees, the potato would start to break down its starch into sugar and would suddenly taste extremely sweet.

If you do buy conventional potatoes, be sure to peel them before preparing them. If new potatoes are available, choose them, as they cannot be stored anyway and are therefore rarely treated, in contrast to storage potatoes.

Maybe we should just get back to a natural rhythm, eat potatoes only as long as they can be stored without chemicals, enjoy other side dishes in summer and look forward to the new potato harvest in autumn. 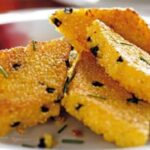 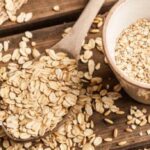