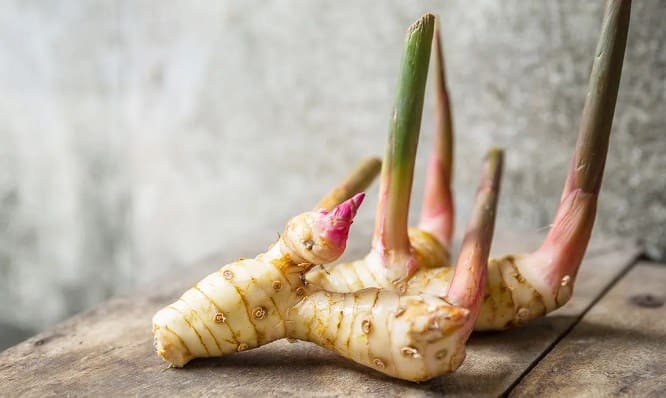 Galangal has been used as a spice and medicine for thousands of years – and not without reason! Whether the stomach hurts, the digestion leads to problems, a cold is approaching, the appetite leaves something to be desired or the travel fever makes you feel unwell: you can rely on the galangal!

Originally from Southeast Asia, real galangal (Alpinia officinarum) – also known as lesser galangal or fever root – is a member of the ginger family, like ginger (Zingiber officinale) and turmeric. From a purely visual point of view, galangal is very similar to ginger and turmeric.

In all three cases, it is the root (the rhizome) that is used both in cooking and in medicine. But while the cream-colored ginger and the yellow turmeric are widely used as medicinal and spice plants all over the world today, the reddish galangal has unjustifiably fallen behind in our latitudes.

It was probably the Arabs who brought the galangal to us on horseback in the 8th century. Not only the people have come to enjoy the fiery plant, but also the horses. The noble animals were fed with galangal to give them special strength and endurance. Today, the medicinal and spice plant is mainly cultivated in southern China, Thailand, and India and exported from there.

It was a long way from Southeast Asia to Europe. But no sooner had the galangal arrived in Europe than its triumphal march seemed to have no end. Numerous sources from the Middle Ages and modern times prove that both the healers and their patients appreciated the effectiveness of the medicinal plant.

Perhaps this is also due to the fact that the hot root was often used as an aphrodisiac in the Middle Ages: a piece of galangal kept in the mouth during lovemaking is said to increase passion immeasurably.

The polymath Hildegard von Bingen (1098-1179 AD) considered galangal to be one of the most important medicinal plants, which is why it is one of the most well-known Hildegard spices, along with Bertram, Kendal, and hyssop. The nun described the galangal as the “spice of life”, which was sent directly from God to ward off diseases – especially heart disease and gastrointestinal problems.

Other areas of application in folk medicine are:

In her work “Causae et Curae” (causes and treatments), Hildegard von Bingen also recommended galangal as a preventive measure, in that it should be sprinkled daily over food (e.g. soups, vegetable stews, salads, and apple sauce) or taken in wine. The latter is then logically also referred to as galangal wine.

It’s really quick to make galangal wine yourself! Try it:

Tip: Since fresh galangal root is relatively rarely available in stores, you can also boil 1 tablespoon of organic galangal powder in 750 ml of wine.
Since the galangal wine is boiled, it contains very little alcohol, but it is not suitable as a remedy for liver diseases or for alcoholics and children. However, there are many other possible uses, such as B. galangal tea, galangal as a spice, etc., which we will come back to later.

First of all, however, the question arises as to which active ingredients are actually responsible for the healing power of galangal.

The active ingredients in galangal

The application of galangal

Apart from the fresh and dried rhizome, the essential oil extracted from it by steam distillation is also used medicinally. It has an antispasmodic, anti-inflammatory, and antibacterial effect. According to an Indian study, galangal extracts have a strong effect against various pathogenic bacteria such as e.g. B. Bacillus cereus, Staphylococcus aureus, and Escherichia coli.

The pungent substances calm the irritated stomach and drive away the urge to vomit (e.g. in the case of motion sickness). In addition, galangal has an antioxidant, digestive, cholagogue, and appetite-stimulating, antiviral, and antimicrobial effect.

Galangal tea is a well-established remedy for the ailments described above – you can get dried galangal root in the pharmacy. 2 to 4 g of dried root is recommended as an average daily dose.

If you have gum disease, you can gargle with galangal tea. If the tea is used against fever, the addition of linden blossom and/or elderflower increases the effect.

Unlike in folk medicine, galangal has so far not been used in western conventional medicine, but in view of various scientific studies, interest in this regard seems to be growing more and more.

Commission E, an independent scientific expert commission for herbal medicinal products of the Federal Institute for Drugs and Medical Devices (BfArM), has classified galangal as medically relevant and describes it as antispasmodic, antibacterial, and also as a prostaglandin synthesis inhibitor.

The so-called prostaglandins are tissue hormones that can trigger inflammation and pain if they are out of balance. Since the pungent substances contained in the galangal root have been proven to counteract this disharmony, the medicinal plant can have an anti-inflammatory and pain-relieving effect on rheumatism or arthritis, for example.

An Indian research team from the West Bengal University of Animal and Fishery Sciences (WBUAFS) has confirmed that galangal has an anti-inflammatory effect. However, the effect of greater galangal (Alpinia galanga) was specifically examined. This is a very close relative of the true galangal, which occupies an important place in traditional Chinese medicine (TMC) and Ayurveda.

In their study, the scientists found that the root extract clearly has anti-inflammatory properties. The extract lowered the histamine level, which can otherwise cause the typical symptoms of inflammation.

They believe that this species of galangal could be a good, effective alternative to anti-inflammatory drugs, which – to the chagrin of countless patients – are associated with a large number of side effects.

Despite scientific advances, many treatments for male infertility remain unsuccessful. More and more researchers are therefore turning their interest to herbal remedies. In 2018, an Iranian research team investigated how galangal affects idiopathic infertility. Idiopathic means that the causes of infertility are unclear.

The clinical study involved 60 subjects with idiopathic infertility. 31 were treated with galangal, they took capsules with a dry extract, which was not specified, for 3 months. The daily dose was 300 mg. 29 of the study participants received a placebo.

After 12 weeks, it was found that in those men in the galangal group, both the sperm count and the total number of sperm with normal morphology (appearance, shape) had increased. The researchers concluded that galangal can be effective in idiopathic infertility without causing any side effects.

Does the galangal work against Corona?

For some time now, reports have been circulating online that galangal is said to be effective against the SARS-CoV-2 coronavirus. In fact, a 2020 Indian study, for example, found that 11 ingredients in galangal can prevent viruses from docking to the host cell. The researchers indicated that the galangal could be a promising candidate to fight the coronavirus.

A study of medicinal plants used in traditional Persian medicine has shown that galangal has direct antiviral and anti-inflammatory properties, protecting organs such as the lungs that can be damaged during SARS-CoV-2 infection. According to scientists, galangal could represent a suitable complementary therapy.

Despite all the euphoria, it must not be forgotten that all of these studies have so far taken place in the laboratory, so the galangal or its active ingredients have not been tested on humans. Nevertheless, said researchers agree that there is great potential in the galangal root, which is also confirmed by the latest results of cancer research.

In the traditional medicine of Malaysia, Thailand, Cambodia, Laos, and Vietnam, galangal has long been used specifically to treat tumors (e.g. stomach cancer). Various studies are currently underway on galangal as a medicine against cancer. It has already been shown that certain active ingredients in galangal deactivate cancer genes and stop the growth of cancer cells.

Researchers from Kings College London have found that galangal can help fight lung and breast cancer. They carried out tests with the greater and lesser galangal and found that the root extract kills cancer cells on the one hand, but is also able to protect healthy cells from carcinogenic substances on the other. The scientists said that plant extracts usually either attack tumor cells or strengthen the immune system of healthy cells – but surprisingly, galangal does both.

Cancer research is still in its infancy with regard to medicinal plants such as galangal, but human studies are pending, whereby the effect can be clearly proven. However, the research results so far are promising. In any case, it pays off to have galangal in your medicine chest, e.g. B. in the form of a long-lasting galangal tincture, which is a versatile remedy.

Galangal tincture cleans up the stomach

This alcoholic extract from the galangal root strengthens the stomach and sometimes has a very positive effect on loss of appetite and digestive problems.

Important: Keep the tincture out of the reach of children.

Take 15 drops of galangal root tincture in some water up to 3 times a day – preferably 15 minutes before meals.
The galangal is also a medicinal spice and therefore worth a culinary voyage of discovery.

The galangal in the kitchen

While galangal has become less and less important in European cuisine since the end of the Middle Ages, Thai, Indonesian or Malaysian recipes are still indispensable today. Whether in curry powder or in the famous Thai curry pastes – the versatile root simply cannot be missing!

Galangal is very similar to ginger in smell and taste but tastes milder. Its peppery spiciness and lemony aroma give a number of dishes a very special touch. The spice goes well with rice dishes, stews, soups, and vegetable dishes, for example.

In Asian cuisine, the greater galangal is primarily used – especially in Thailand (formerly Siam), which explains why it is also known as Thai ginger or Siamese ginger. For example, the delicious coconut milk soup “Tom kha gai” is a classic of Thai cuisine. In Indonesia, galangal gives the rice dish “nasi-goreng” its distinctive flavor, but drinks are also flavored with grated galangal root or galangal powder.

The so-called Jamu drinks, for example, taste excellent, but also serve to refresh and strengthen you. The word “jamu” means “herbs, flowers, and roots” and refers to all herbal remedies and traditional Indonesian medicine in general.

We now have a drink on the market called “Jamu”, but it pays to make it yourself to experience it in its purest form.

This Jamu recipe stimulates the mind and has a cleansing effect on the body.

Wrapping the roots in cling film and storing them in the crisper keeps them from drying out and keeps them fresh for 2 to 3 weeks. If you want to increase the shelf life of the galangal root, you can peel it, cut it into thin slices and dry it.

Dried galangal roots – like dried mushrooms – are best soaked in lukewarm water for 1 to 2 hours before use. However, commercially available galangal powder can also be used.

With all these wonderful uses, galangal will certainly gain importance again in our country – whether as a remedy or as a delicious ingredient in the kitchen. 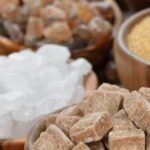 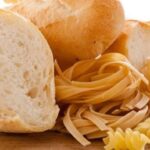