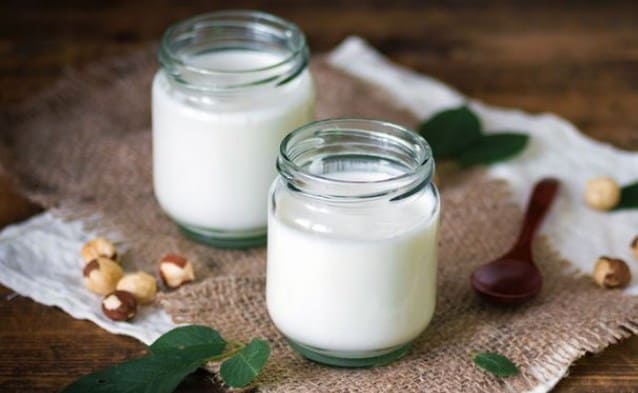 Vegan yogurt has been around for a long time. It often contains far too many superfluous additives. It tastes much better when you make it yourself – and of course, self-made yogurt is also healthier. We not only explain how you can make your own purely plant-based yogurt or your purely plant-based sour milk from just 2 ingredients in 5 minutes but also present a soy-free yogurt variant: homemade almond yogurt.

Vegan yogurt – make it yourself

Yogurt is bought a lot, but it is also one of those foods that many people have been making themselves for a very long time. At the same time, yogurt is considered a very healthy food – but only unsweetened natural yogurt, not the sugar-rich fruit variants. Officials therefore often regret that not everyone eats yogurt every day.

However, it is now suspected that it is not the milk in yogurt that is responsible for the product’s possible health benefits, but the lactic acid bacteria it contains.

Which lactic acid bacteria are contained in yogurt?

There are different strains of bacteria that can ferment milk – whether animal or vegetable milk. In the sour original yogurt it is mostly Lactobacillus bulgaricus and Streptococcus thermophilus, in the modern mild yogurt it is Lactobacillus acidophilus or also Lactobacillus casei and Bifidobacterium bifidum.

So if you want to make yogurt, you don’t have to use cow’s, sheep’s, or goat’s milk. You can also use another suitable raw material, inoculate it with the appropriate bacterial strains, let it ferment, and enjoy the result.

If you use plant-based milk, the result is a vegan yogurt that looks and tastes almost exactly like yogurt.

What types of plant milk can you use to make vegan yogurt?

Not every plant-based milk is suitable for making yogurt, but most are sour, just not as “thick” as yogurt. Vegan yogurt works best with soy milk, as this has a similarly high protein content as cow’s milk. Low-protein milk types such as rice or oat milk, almond milk, or coconut milk often remain liquid, so that thickeners are needed if you want a firmer consistency.

Which vegan yogurts are there?

Since you can buy almost anything these days, vegan yogurt variations have of course been on the market for a long time. The first vegan yogurt was soy yogurt, followed by coconut yogurt, almond yogurt, and lupine yogurt.

What ingredients are in store-bought vegan yogurt?

A look at the list of ingredients shows very different things.

In addition to the main ingredients, the Alnatura organic products almond and coconut only contain a thickener (tapioca starch) and a stabilizer (locust bean gum), which is because vegan yogurts simply don’t get as firm as yogurt made from milk and you, therefore, can help with appropriate (harmless) ingredients.

The natural organic soy yogurt from Provamel – the organic brand from the Belgian company Alpro – uses pectin as a stabilizer, plus corn starch and an acid regulator, namely the controversial citric acid.

In the conventional natural soy yogurt variant from Alpro, far more additives are apparently required in order to be able to present the consumer with a tasty end product. The original list of ingredients looks like this:

The following two examples show that it is also possible without any additives:

Soya yogurt is sold in organic shops, a brand of the French company Triballat Noyal, which also produces conventional dairy products. Organic soy yogurt contains only three ingredients and is therefore recommended: soy drink made from water and soybeans, plus yogurt cultures.

In conventional retail, we found a recommendable organic soy yogurt at Rewe (Rewe Bio + vegan, natural soy without sugar), which also consists only of soy drink and yogurt cultures as well as a little sea salt.

If a fruit preparation is added to the products, you can no longer avoid the sugar and usually also the aromas. With organic products it is cane sugar, with conventional yogurts it is conventional table sugar plus glucose-fructose syrup. However, it is precisely the aromas that make the product almost inedible for many people, as they taste strongly artificial – regardless of whether it is organic yogurt or not.

How can you make vegan yogurt yourself?

In view of the ingredients mentioned, it often makes more sense to make vegan yogurt yourself, just like with “normal” yogurt made from cow’s milk.

Make your own soy yogurt

Soy yogurt is particularly easy to make, as the soy milk – if it is mixed with yogurt cultures and is warm – sets without any problems, which does not work easily with oat, rice, or millet drinks.

The small container holds 1 liter. Even if you only z. B. need 200 ml of it, it doesn’t matter. You can reseal the container and keep it in the fridge for up to a week.

The yogurt also tastes very delicious as sour milk. Simply pour into a cup or glass, stir and enjoy!

Make your own almond yogurt

But what do you do if you don’t want either cow’s milk or soy yogurt? Of all the soy-free alternatives, almond yogurt is the best. The preparation time is relatively short at 10 to 15 minutes, so preparing the yogurt does not require much effort as soon as you have the ingredients. However, it is important to work very hygienically, otherwise, the yogurt could quickly go moldy. It is therefore best to thoroughly boil the glasses in which the yogurt is to ferment.

You need the following ingredients for about 350 g of yogurt:

Now pour off the soaking water from the almonds and rinse the almonds again in a sieve. Then mix the almonds with 800 ml of water in a high-performance blender for a few minutes.

Place the cloth or nut milk bag in a strainer and the strainer in a bowl. Pour the almond milk into the cloth and squeeze out all the liquid vigorously. The leftover pomace can be used for baking or muesli.

Stir the yogurt ferment into the milk until all the powder is dissolved. Then pour the milk into the boiled and dry glasses. Leave at least 2 cm free at the top edge. (The milk does not need to be heated.)

Close the jars and put them in a warm place. Depending on the temperature (e.g. in the kitchen or on the radiator), the fermentation time can vary (12 to 24 hours). Leave the yogurt to stand until the whey (aqueous liquid) has settled at the bottom and a solid mass floats on top.

Now carefully hold the solid mass with a spoon and pour off the whey. You can put the solid mass in a bowl and stir it into a creamy yogurt with a whisk. Fill this back into one of the mason jars and put it in a cool place. Within a few hours, it will firm up a bit and can now be eaten.

How can vegan yogurt be served?

If required, the vegan yogurt can be refined with fruit, yacon syrup, vanilla powder, cardamom, nuts, etc. – depending on the intended use. Of course, you can also continue to use the whey and e.g. B. mix with fruit, resulting in a deliciously healthy and probiotic whey drink.

We hope you enjoy preparing it and bon appétit! 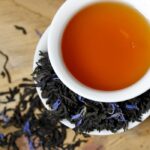 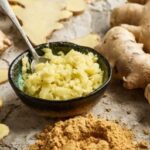