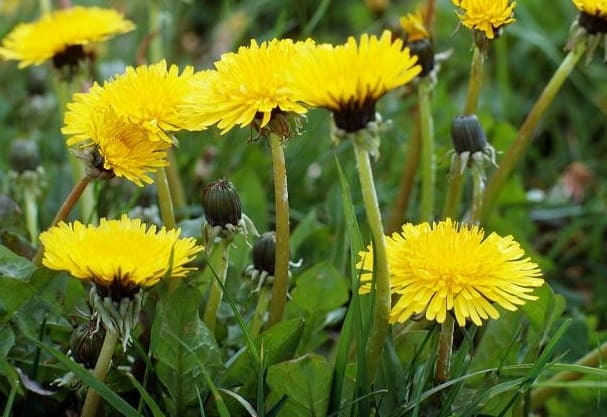 Many gardeners only see the dandelion as an annoying weed. In reality, the dandelion is a real miracle herb that regulates digestion, cares for the liver and bile, helps with rheumatism and kidney stones, and can be used as an all-around tonic for any problem.

The dandelion belongs to the daisy family and thus to the same plant family as the marigold, the sunflower, the aster, or the daisy.

Perhaps you have already noticed that the dandelion is a particularly powerful and resilient plant because it grows out of the smallest crack in the asphalt and defies even the greatest summer heat there. The dandelion transmits this insensitivity, toughness, and vitality to all those who know how to use it.

The effects of dandelion

The dandelion has many healing properties and effects. It can be used in the form of salad, tea, plant juice (the white milky juice from the stalks), fresh plant juice, or dandelion root extract.

It is important to use the preparation of your choice regularly and as a treatment over several weeks, or even better: simply eat the dandelion fresh every day.

The positive influence of dandelion on all organs involved in digestion is particularly well known. Dandelion increases gastric juice secretion, stimulates the appetite, and also has an antispasmodic effect.

For this reason, dandelion tea, dandelion salad, dandelion juice, and the powerful dandelion root extract are used to treat digestive problems such as flatulence and a feeling of fullness.

Dandelion for liver and bile

Dandelion also has a choleretic effect. This means that it stimulates the production of bile in the liver, causes the bile to remain thin, and improves lipid metabolism, thus helping to break down e.g. B. fatty liver (in conjunction with an appropriate diet).

In the case of problems with the liver or bile, the dandelion is one of the most important medicinal plants and is therefore not only used for liver cleansing but also traditionally for hepatitis (jaundice), gallstones, and liver cirrhosis – of course under the supervision of a naturopath or doctor who is experienced in phytotherapy.

Recently, the world of scientists has been increasingly dedicating itself to the possible areas of application of dandelion in the field of cancer therapy. There is already promising evidence that dandelion contains ingredients that can inhibit the aggressive growth of tumors.

The specialist journal International Journal of Oncology published a study in 2008 that demonstrated the positive effects of dandelion tea. It was a tea made from dandelion leaves, which was able to reduce the growth of breast cancer cells in the said cell study.

The researchers now also tested prostate cancer cells in the same way and got similar results. The scientists concluded that dandelion extract could be considered a “new” anti-cancer agent to support cancer therapy.

The International Journal of Oncology published a report in 2011 that a dietary supplement containing, among other things, dandelion may inhibit the growth of prostate cancer cells.

A third scientific dandelion study was published in January 2011 in the Journal of Ethnopharmacology. The aim was to test the effect of tea made from dandelion roots on leukemia cells. It turned out that the tea could kill the leukemia cells.

Dandelion as an antioxidant against oxidative stress

Italian scientists from the Annunzio University of Chieti-Pescara compared extracts of turmeric, dandelion, rosemary, and artichoke in a study published in 2010.

First of all, the researchers confirmed the positive effect of these plants on the liver and gallbladder. Their anti-cancer, antioxidant, and protective effects were then compared.

While turmeric had the strongest antioxidant effect, it was found that dandelion also had a strong antioxidant effect. The scientists confirmed that the plants mentioned can support healing processes of various kinds.

Dandelion as a remedy for the urinary tract

Conventional diuretics (also known as “water pills”) not only ensure that water is drained from the body but also flush out minerals.

Dandelion, on the other hand, also has a diuretic effect, but at the same time, it supplies the organism with important minerals, especially potassium so that the (proper) use of dandelion – in contrast to synthetic diuretics – cannot lead to a mineral deficiency.

In a small 2009 study of 17 people, dosing 8 mL of dandelion leaf extract three times a day resulted in a significant increase in urine frequency and volume, demonstrating the diuretic effect.

Dandelion has long been used in folk medicine to treat urinary tract infections, irritable bladder, and other diseases of the urogenital tract.

How to use dandelion in naturopathy

With all of the aforementioned complaints, the dandelion can be used very easily in the form of tea or fresh plant juice. Of course, you can also make tea from the dried leaves.

To make dandelion leaf tea, take a heaping teaspoon of the dried and crushed leaves, place them in a tea filter bag, close the bag and hang it in a cup that holds about 200 to 250 ml. Then pour boiling water over it and let the tea steep for 10 minutes. Now take out the bag and sip the tea.

You can make fresh plant juice yourself. For this, you need a so-called grass press or a powerful juicer. Juice the dandelion leaves three times a day until you get 50 milliliters of juice each time.

This is drunk very slowly, preferably on an empty stomach and always at least half an hour apart from meals.

It is far easier to take dandelion juice in the form of commercially available pressed juice. If it is a carefully manufactured, high-quality organic product, you can benefit from the health benefits of all parts of dandelion (leaves, flowers, and roots).

How to use dandelion externally

The dandelion can also be used externally, for example for skin problems or poorly healing wounds.

Externally, too, the dandelion can perform miraculous deeds. Corns, calluses, and warts, for example, are moistened two or more times a day with the white plant sap from the dandelion stalks and, according to folk medicine reports, can be eliminated with this treatment after several weeks of use.

Dandelion as a wound healer

Since dandelion has antibacterial and therefore anti-inflammatory properties, it can be used to treat and heal wounds and prevent infections.

Pain and/or itching due to insect stings or bites can also be relieved by applying the sap of the dandelion stem or root.

If the stalk juice does not seem effective enough for you, you can also mash the entire plant in a blender with a little water and apply this mash to the appropriate areas.

Vitamins and minerals in dandelion

Dandelion not only helps to prevent or treat various symptoms and diseases, but as a food, it also provides a multiple of vitamins and minerals – compared to conventionally cultivated lettuce.

The dandelion provides very good vitamin A, vitamin C, vitamin B1, and B2 as well as calcium, magnesium, potassium as well as iron. In addition, its bioactive plant substances such. B. bitter substances and flavonoids. The dandelion is therefore not only a phenomenal medicinal product but also a wonderfully nourishing and prophylactic food.

How to use dandelion in the kitchen

Dandelion leaves can be enjoyed as a salad, vegetable, soup, juice, green smoothie, or tea. The flowers can be transformed into dandelion wine, dandelion beer, and dandelion flower jelly or used as edible decorations for all kinds of dishes.

Dandelion Wine made from the dandelion flower

Anyone who sees the dandelion blooming in the meadows may think of many things, but probably wine lasts. But that is exactly what can be brewed from the yellow flowers of the dandelion. Although the result will not be a full-bodied, dry Saint-Émilion, it will be a no less valuable dandelion wine because of its rarity.

You need a bucket of fresh dandelion flowers, which you pour over with a bucket of boiling water. Leave this approach for three days. Then add 1.5 to 2 kg of sugar, a piece of ginger, the zest of an orange, and a lemon.

Boil everything together in a large saucepan for half an hour and then allow the mixture to cool slightly. Now add yeast and pour the wine base into a cider barrel. After two days of fermentation, close the barrel. 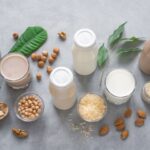 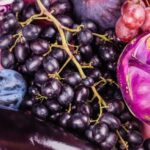