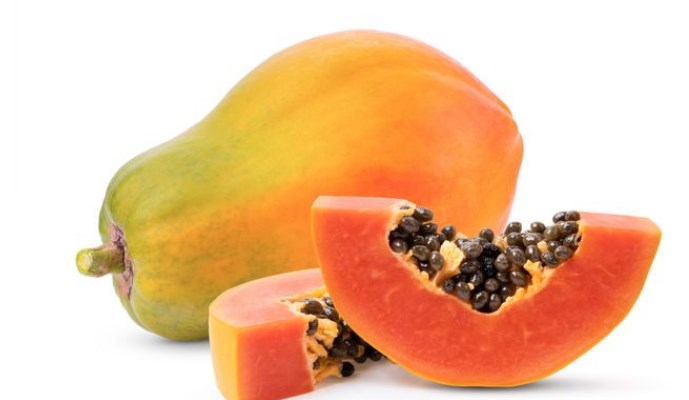 Papaya seeds are the small black seeds of the tropical fruit papaya. The health benefits of the delicious fruit have long been known. Papaya seeds, on the other hand, all too often end up in the trash. A mistake! Because the papaya seeds are almost more valuable than the fruit.

Papaya Seeds – The seeds of the papaya

Papaya seeds are the seeds of the delicious papaya. The papaya, on the other hand, belongs to the melon tree family and therefore looks a bit like a melon.

Today it is cultivated everywhere in the tropics and subtropics and is particularly well-known for its richness in enzymes. The papaya-specific enzyme is called papain and comes from the group of proteases, i.e. protein-splitting enzymes.

In industry, papain is used as a tenderizer for meat, but in alternative medical preparations, it serves many different purposes: papain helps to prevent thrombosis, keeps the inside walls of vessels clean, and has an anti-inflammatory effect so that it can be used in many inflammatory diseases.

The papain, however, is hardly contained in the ripe papaya fruit. On the other hand, it is found in large quantities in the skin of unripe fruit and in papaya seeds.

Papaya seeds also protect the digestive system from intestinal parasites. If there is already a parasite infestation, then in many cases the papaya seeds ensure that the unwanted guests quickly disappear – and often without the patient having to resort to the side-effect-rich chemical club.

As early as 1959, a large-scale study took place in India with about 1700 children aged one to five years, all of whom were infested with worms. The most common worms were roundworms, threadworms, and pinworms. The doctors at the M. Y. Hospital in Indore, India, were finally able to get the treatment of the little patients under control by using papaya seeds.

A Nigerian study from 2007 led to similarly successful results. It was published in the Journal of Medicinal Food and confirmed the antiparasitic effect of papaya seeds.

Sixty children were included in the study. After examining a stool sample, they were all infested with intestinal parasites. Half of the children received an extract of dried papaya seeds with honey, the other half received a placebo with honey.

In those children who took papaya seeds, the intestinal parasites could be eliminated by 71.4 to even 100 percent. Side effects did not occur. In the placebo group, on the other hand, there was only a decrease in parasite infestation of 0 to 15.4 percent.

Participants in the study were 326 children (4-12 years) from East Africa. They were divided into three groups. Group 1 received 300 ml corn porridge with 10 mg papaya seed powder daily in the morning, group 2 received the porridge without papaya seed powder, while group 3 received a single dose of albendazole (400 mg), a pharmaceutical antiparasitic agent.

Before the start of the study, the current status was determined using stool samples. Roundworms were particularly common. Ringworm and whipworm were also present, as hookworm in a few children. After two months, stool samples were examined again. It was found that the papaya seed powder reduced the number of roundworm eggs by almost 64 percent, while albendazole managed a 78.8 percent reduction. In the control group, however, the worm infestation increased slightly.

It was particularly interesting that the papaya group was particularly rarely affected by ringworm after the study, while the children in the albendazole group suffered from ringworm even more frequently, which could indicate that the drug only kills some types of worms in the short term, but rather weakens the body’s own defenses so that the patient is then more susceptible to renewed parasite infections.

The researchers from the Kenya Medical Research Institute in Nairobi Kenya concluded that a porridge enriched with papaya seed powder could very well be integrated into Africa’s deworming programs.

Papaya seeds as a wormer for animals

Papaya seeds could also be used in naturopathic veterinary medicine.

As a wormer, dried and ground papaya seeds are just as well tolerated and effective in many animals as they are in humans. There are a number of reports that many farmers, especially in tropical and subtropical countries, successfully and regularly deworm their dogs, sheep, and cattle with papaya seeds.

A Nigerian study published in the African Journal of Biotechnology in 2005 tested the use of papaya seeds on pigs infected with parasites. These were tubeworms, pig whipworms, and roundworms. The papaya seeds did the worming 90 percent of the time.

However, papaya seeds are not only effective against parasites, but also against a number of bacterial infections.

In 2008, the University of Gondar in Ethiopia looked into the antibacterial properties of papaya seeds.

It has been shown that papaya seeds are effective against bacteria such as Escherichia coli, Staphylococcus aureus, Salmonella typhi (typhus pathogen), and Pseudomonas aeruginosa and can inhibit the growth of these bacteria.

Staphylococcus and Pseudomonas in particular are responsible for the increasing number of hospital infections and are often resistant to antibiotics. These bacteria can cause infections of all kinds, e.g. B. bladder infections, pneumonia, skin infections, or (in newborns) navel infections.

It is therefore definitely worth taking a sachet of papaya seeds with you to the hospital – if a stay there is unavoidable – and chewing a few seeds from them from time to time (of course only if your doctor does not mind and your condition allows it).

Whether an animal or human is attacked by parasites or bacteria depends on the type of invader, but also on the resistance of the individual and their immune system.

Papaya seeds show double effectiveness here. On the one hand, they help to destroy unwanted parasites and on the other hand, they strengthen the immune system – as explained below – and make the body fit to fight against its attackers.

So if you want to do a cure with papaya seeds, for example, to fight internal parasites or to prevent them, then you are not only free from parasites but also have an increased immune system.

With conventional medical anti-parasitic drugs (antihelminthics), on the other hand, side effects such as stomach ache, flatulence, diarrhea, and headaches are not the only things to be expected. In addition, these drugs can also stress the liver, which is why some antihelminthics should not be taken if liver damage is already present. But papaya seeds even protect the liver:

Papaya seeds for the liver

There are always indications and experience reports that papaya seeds can play an extremely helpful role in the detoxification and regeneration of the liver. The valuable active ingredients in papaya seeds are even said to be helpful in the case of cirrhosis of the liver.

Reports recommend consuming 5 to 6 dried papaya seeds daily. The seeds should be finely ground and taken with a juice (e.g. lime juice).

After just 30 days of use, such a regimen should lead to surprisingly positive results in terms of liver health – which is said to be due in particular to the papain contained.

Papain activates the growth hormone somatropin via various detours. This is extremely important for cell renewal and cell regeneration in the liver and it has long been known that an overworked liver recovers more easily if enough somatropin can be produced in the organism.

Therefore, include the papaya seeds in your liver cleanse regimen or in your catalog of measures for liver regeneration. The effort is minimal. You simply chew 5 papaya seeds several times a day or use the above recipe with the lime juice.

A completely different possible field of activity for papaya seeds has been researched since at least the 1970s: contraception for men

Papaya seeds as a contraceptive for men?

In June 2014, the men’s magazine “Men’s Health” conducted an online survey of men’s preferred contraceptive methods. 55 percent of the almost 1,000 participants preferred the pill for contraception and thus “trustfully” put the contraception in the hands of the woman.

Only 30 percent do not want to leave protection against an unwanted pregnancy to women alone and therefore use condoms.

If there were a male contraceptive that was equivalent to the pill and easy to use, women could finally entrust contraception to men after many decades of taking the pill.

However, it remains to be seen whether papaya seeds or extracts from them will prove equal to the pill. However, primitive peoples are said to have used it as a preventive measure in ancient times.

This contraceptive method would have no side effects, at least no negative ones. In addition, fertility returns after a few weeks to months if papaya seed intake is stopped. The development of a papaya seed extract that could be used in a targeted and well-dosed manner for contraception and that is capable of effectively and long-lastingly suppressing the formation of sperm would therefore be a good idea.

There are still no corresponding studies on humans on this subject, but papaya seed extract has a very good contraceptive effect on monkeys and rats – according to the following studies.

In 2002, a research team led by Prof. N. K. Lohiya examined the sperm quality of male langur monkeys that had been given a preparation containing i.a. papaya seed extract.

The extract gradually reduced sperm concentration, while the motility of the sperm present was completely inhibited and sperm viability decreased.

Complete azoospermia was achieved after 90 days of treatment, which means that there were no longer any mature male sperm cells in the ejaculate. Infertility persisted throughout the remaining 270 days of research.

After stopping the extract, sperm count and quality gradually recovered. 150 days after the end of the experiment, values ​​as at the beginning of the investigations were almost reached again.

Papaya seeds were similarly successful in a test run in 2010. Here they ensured reliable contraception in male rats. Even after 52 weeks of contraception, there were no side effects.

The papaya seed extract was used in concentrations between 100 and 500 mg/kg body weight and was sufficient in this amount to render all rats infertile.

However, even in these animal studies, extracts were used and not just papaya seeds. The consumption of papaya seeds alone would therefore probably be a rather unsafe method of contraception.

Papaya seeds can be taken as follows:

This procedure should be carried out as a cure (e.g. for 2 to 3 weeks, then a 1-week break, then again for 2 to 3 weeks) in order to avoid habituation effects, but of course until the parasites have disappeared.

Where do you buy papaya seeds?

On the one hand, you can of course buy fresh papayas, eat some of the seeds fresh and dry the rest in advance. However, the seeds must be carefully separated from the pulp and dried thoroughly so that they do not become moldy, which would be very counterproductive since mold toxins are extremely harmful. However, if the kernels are dried at too high temperatures, this in turn damages the enzymes they contain.

Of course, the papaya fruit also has many valuable health properties. 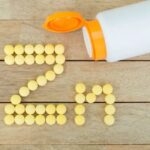 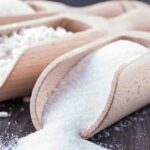