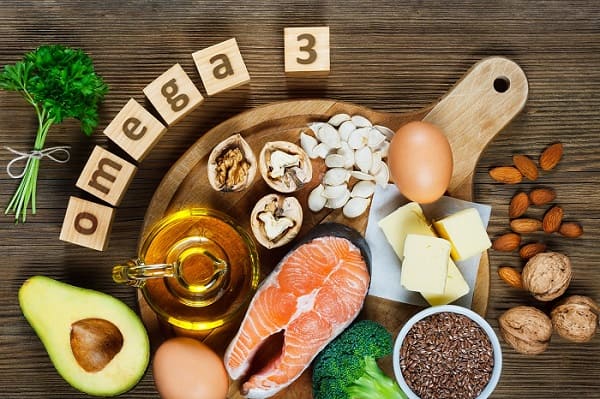 Omega-3 foods should be a regular part of your diet. Omega-3 fatty acids are important for heart and brain health. The body can only produce them to a limited extent.

Which foods contain a lot of omega-3 fatty acids?

The following foods are particularly rich in omega-3 fatty acids and should be included in your diet.

Linseed oil is a real local superfood that contains a high proportion of omega 3. Linseed oil should not be heated so that the valuable ingredients are not destroyed . It is therefore best suited for refining salads, muesli or even simple quark . Linseed oil goes rancid quickly, so it should be used up quickly and stored in the refrigerator. Linseed oil can also be stored in the freezer for several weeks.

The following applies: In order to be able to utilize the contained omega-3 fatty acids as best as possible, they should be crushed or crushed before consumption .

Also walnuts and walnut oil are good sources of omega 3. Eating a handful or so of walnuts on a regular basis can help improve fat metabolism and have a positive effect on cholesterol levels.

The following applies to walnut oil : do not heat it up , rather use it for cold dishes such as salads or smoothies . In addition to fatty acids, walnuts also provide plenty of minerals and vitamins.

One of the fattiest fish and one of the best sources of Omega 3 is herring. Most of it is served as salted herring or matjes. It is best, however, to eat the fish fresh.

Salmon is very popular and versatile in the kitchen. It can be enjoyed raw as sushi, as smoked salmon, or fried and grilled as a salmon steak. Tip: It is best to buy wild salmon . It is often more expensive, but with the appropriate certificates it is more sustainable than salmon from aquaculture.

Tuna is versatile and one of the best-selling edible fish in Germany. Whether raw as sushi, fried as a steak or out of a can – you can use it in a variety of ways in the kitchen. In addition, it provides a lot of omega 3, but only in the fresh fish variety. Since many tuna stocks are threatened, you should pay attention to gentle fishing methods and the type of fish when buying .

Soybeans score not only with unsaturated fatty acids, but also with other important nutrients. Soy is a good source of vegetable protein and also provides many minerals and vitamins. Soybeans must always be cooked. They are particularly suitable for the preparation of stews.

Olives and the oil obtained from them are indispensable in Mediterranean cuisine. Its Omega 3 content is lower compared to other vegetable oils . However, it also provides secondary plant substances that can also have a positive effect on cholesterol levels. In order to benefit from the positive effects, a high-quality, cold-pressed olive oil should be used, which should not be heated if possible.

Wakame (seaweed) belongs to the brown algae. Algae are mainly used in Asian cuisine. In addition to numerous vitamins, minerals, trace elements and a high protein content, algae are also a very good source of omega 3 from plants .

Kale is a local vegetable that can be bought freshly harvested in autumn and winter. Kale is a true superfood: the green leaves are low in calories and, in addition to omega 3, provide numerous other nutrients such as protein, vitamin C, fiber and phytochemicals . You should definitely blanch kale before eating it. As a result, the leaves lose the bitter substances they contain and can be processed better.

The pear-shaped fruit is bursting with fat. Although it contains comparatively little omega 3, it provides a lot of monounsaturated fatty acids . These have a positive effect on cholesterol levels. In addition, the Avocado rich in vitamins and minerals. It is suitable as a side dish in salads, as an ingredient in dips and spreads , or you can enjoy it pure with a little lemon juice, salt and pepper.

In addition to alpha-linolenic acid, the long-chain omega-3 fatty acids DHA (docosahexaenoic acid) and EPA (eicosapentaenoic acid) are particularly important for the body. Since these are particularly found in fish, vegans usually take in too little of them. Algae are the ideal vegan alternative to fish . Because they are the only plant-based sources of DHA and EPA. There are now also algae oils and foods enriched with algae oil on the market.

What are omega-3 fatty acids?

Together with omega-6 fatty acids (linoleic acid), omega-3 fatty acids belong to what are known as polyunsaturated fatty acids . This designation has nothing to do with a satiating effect, but is due to the chemical structure. Fatty acids are made up of carbon, oxygen and hydrogen atoms. Every fatty acid contains a certain number of carbon atoms. These are connected to each other like in a long chain. Polyunsaturated fatty acids have two or more double bonds in this carbon chain. Depending on where the first double bond is located, it is called omega 3 or omega 6.

The body forms arachidonic acid from omega-6 fatty acids and EPA from ALA. If there is too much omega 6, this prevents the conversion of omega 3. It is therefore important that both fatty acids are present in the blood in a certain amount. A 5:1 ratio of omega 6 to omega 3 is considered ideal. However, because of our eating habits, we consume a lot of omega 6 fatty acids (e.g. from sunflower or safflower oil, the margarines and fast food made from them) and at the same time too little omega 3 we take, the ratio in the blood is often 15:1 or higher. If the supply of omega-6 fatty acids is large, the body produces more arachidonic acid. This can promote the development of inflammation.

Why are omega-3 fatty acids so important?

Omega-3 fatty acids have various functions in the body. On the one hand, they are part of the cell membranes and keep vessels and cells elastic. The brain and nerve cells also need fatty acids to function properly. The body also forms important messenger substances from omega 3. These can, for example, improve the flow properties of the blood and have a positive effect on cholesterol and triglyceride levels. Because of this, they help prevent cardiovascular disease. Omega-3 fatty acids also regulate inflammatory processes. These play a role in the development of diseases such as diabetes, arthritis or autoimmune diseases.

The German Society for Nutrition (DGE) recommends around 1.5 grams of ALA per day for an adult. This amount is contained in a tablespoon of rapeseed oil or a teaspoon of linseed oil, for example. The daily requirement of EPA and DHA for an adult is around 250 to 300 milligrams. According to the DGE, pregnant and breastfeeding women should take an additional 200 milligrams of DHA per day so that the child’s brain and eyes develop normally.

If you want to eat healthily, you shouldn’t focus on the individual fatty acids. It is much more important to pay attention to the total amount and the selection of fats. Oily fish (once or twice a week = 200 grams of fish), rapeseed oil, linseed oil and walnuts are suitable for a good omega 3 supply. At the same time, one should reduce the intake of omega 6 and consume corn, sunflower and safflower oil as well as animal fats in moderation.

Omega-3 fatty acids are essential, i.e. vital fatty acids that cannot be produced by the body itself and therefore have to be ingested through food. They play a major role in the brain development of fetuses because they are an important part of our brain cells, our nerves and cell membranes, counteract inflammatory reactions and have a positive influence on cardiovascular and rheumatic diseases. So they definitely have their justification as brain food, because they can protect against dementia and improve our memory performance.

Basically, healthy people who eat a wholesome and varied diet can meet their Omega 3 needs through food. An overdose is therefore not possible. The situation is different with dietary supplements such as fish oil capsules or foods enriched with omega-3 fatty acids.

The European Food Safety Authority (EFSA) classifies an additional daily intake of up to five grams of DHA and EPA as harmless to health. Anyone who exceeds the maximum dose risks high cholesterol, a weakened immune system (especially in older people) and an increased tendency to bleed. For this reason, according to the Federal Institute for Risk Assessment (BFR), no more than 1.5 g of omega 3 should be consumed per day from all sources (including foods such as fish, margarine, nuts).

In some cases, however, a dietary supplement can also be useful, for example in the case of certain diseases such as rheumatism. However, this should only be done in consultation with the doctor treating you. If you don’t like fish or are vegetarian/vegan, you can supplement your diet with DHA-rich oils from microalgae. 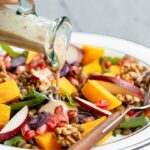 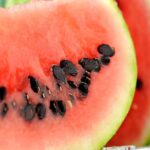